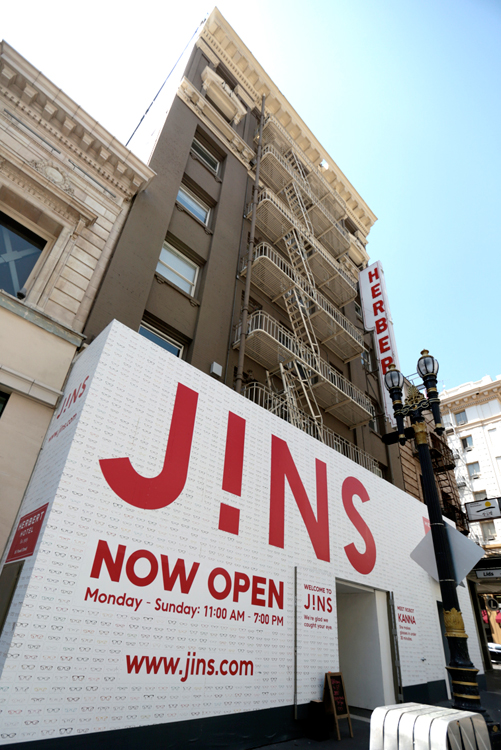 The CEO of the U.S store, Mr. Tomita, explained about the product lineup while guiding us through the store.
The company set the price range at $60, $80, $100, and $120. These prices include aspheric lenses as well as the frames.
JINS has opened more than 340 stores in Asia since it was founded in Tokyo in 2001. Now JINS has opened its first North America location.

Why did you choose San Francisco as the first location outside Asia?
We spent 1 year researching the cities in the U.S. The reason why we chose SF is not only distance from Japan (compared to the east coast), but also the fact that SF is the place of the gateway to many cultures. And we also wanted to be close to Silicon Valley as we have innovative products launching as well.

Which products are popular in San Francisco?
The Boston Keyhole Glitch is popular with our customers.

So does your company have a production line only for the U.S. besides the production line for Japan?
Yes, we do. But all products are designed in Tokyo, and those products sold in San Francisco as well as those sold in Tokyo are basically the same. Some products are tailored only for the U.S customers, such as the nose pads, which are adjusted for the different faces of American clients.

This store is really clean and stylish.
Thank you. We asked an U.S. architecture and design firm to design the store. The furniture was designed and made in California, and it’s made only for this store. It’s JINS’ most advanced design.
We have 1200 different styles of glasses in the store all the time, and we have a special display method.
For example, most eyewear stores set vertical partitions, but usually no side partitions.
However, we set side partitions to make customers want to put the products back where they were.
Plates on the tables are also set in the same way, so customers put them back neatly.

I can see lens edging robot KANNA from the outside, which is the reason why customers can get glasses in 30 minutes.
Yes. In Japan, the machine requires direct human intervention at some steps of production, but this KANNA doesn’t require any human intervention once it starts. This is the only system like it in the world.

It’s all glass covered, so it’s fun to see the process of making the glasses.
Especially children enjoy watching it. To entertain adult customers, we have them write their names or draw pictures on cards so that they can recognize their own trays. Customers can take the cards home as a memento, or turn in the cards as part of our company survey which enters them in a drawing to win free glasses.

Did KANNA come from Japan?
Originally, it was an automatic processing machine. The materials came from various places. For example, the machine that cuts the lenses is from Japan but assembled in the U.S. The parts were gathered from Japan, China, and the U.S, and assembled in this store. Learning from our experience and past techniques, we created this advanced robot.

PROCESS OF MAKING GLASSES BY KANNA 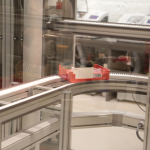 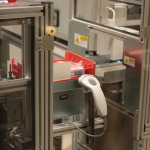 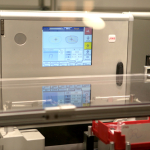 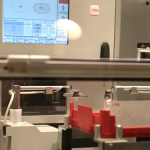 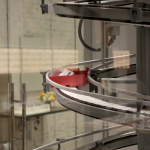 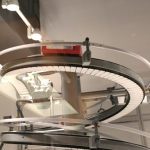 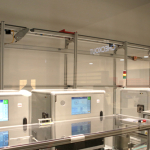 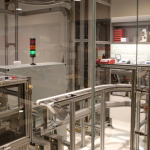 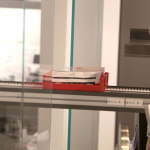 Our company is located in Los Angeles. Are you planning to open any stores in Los Angeles?
We have just opened this store so our priority is making this business a success. Of course, we are thinking about expanding in the future.
(We are researching locations in Santa Monica, Abbott Kinney, Long Beach, and Hollywood in Los Angeles.)

So we can buy JINS’ glasses only online in the U.S?
Yes.

Will you advertise in the U.S?
We’d like to work on that with the aim of becoming firmly established here. Fortunately, many customers visit our store due to its location, and those customers who have purchased our glasses bring their friends and partners. So it’s a good start.

We heard that some American staff had been trained in Japan for a few years to expand the business to the U.S. Are those staff members now here? And how many staff from Japan are here?
The staff who had been trained in Japan are now working at this store. There are a few Japanese staff members working at the head office, but all of the store employees are American. (The variety of languages that the staff speak are Japanese, Chinese, Arabic, Spanish, and Portuguese as well as English)

Returns or exchanges are common in the U.S. Does this store accept that? Is the warranty service the same as at the Japanese stores?
Yes, we do. Customers can return or exchange items within 90 days. We also provide a 1 year service warranty for problems with lenses or frames.

This store doesn’t provide eye exams, but will you provide them in the future?
According to California state law, optometrists located inside retail stores must separate their offices from the retailer. So we will continue to have only the retail operation.

Some American eyeglass stores have an optometrist in the same location, but is that an exception?
According to the law, they must be separate companies. Each company has to make a separate lease contract with the property manager directly.
American people know that they need prescriptions to get glasses, so customers usually bring their prescriptions to the store.
Even if customers don’t bring their prescriptions, they can ask their optometrists to FAX them to the store. So it’s not a big deal.

You mentioned earlier that JINS has about 340 locations in Asia. Do you feel there are more business opportunities in the U.S?
The size of the eyewear market is around 400 billion yen in Japan, and 3 trillion yen in the U.S.
I think the sales potential in the U.S is several times higher than that in Japan, even when we take the population into consideration.

It took 2 years from establishing the business in the U.S. to the opening of the first store. What are the reasons for this?
For the first year, we were looking for the best location. Los Angeles and other cities were candidates. The construction of our flagship store in SF started in August, 2014. This building is more than 100 years old, so we had to stop traffic when we did the electric wiring.
It took a long time for the initial preparations. We had to get permission from the city of San Francisco for the design of the facade, which took 9 months.
That’s why the construction of the front of the building is still unfinished. It will eventually be glass walled, so the inside will be visible.

I heard that the association of optometrists in Japan is strict. Have you ever experienced opposition from other companies in the same business?
We have never had any opposition or restriction even in Japan. Though we have been criticized because our business style is unique.
Our company is also a member of the Association of Optometrists in America.
I mentioned about the eye exams earlier. Regional Optometrists actually have welcomed our company, because we increase their business by making many pairs of glasses.

When you open a store in Japan and in the U.S, about how much of a cost difference is there?
It’s hard to compare, because none of the Japanese stores are as large as this store. I think the rent for this store is really expensive because of its location and size.
The initial cost of investment is rather high because we renovated an old building. Moreover, this store is huge. The floor area is three times larger than the standard Japanese store.
The rent corresponds to these factors.

Are you planning to go public on the stock exchange?
No. We have to get good results at this store first. To go public is not our goal.

I guess that’s all I need to know. Thank you for the opportunity to interview you today.
Thank you. I’m looking forward to seeing the article.

Yoshikitty – Inspired By Rock Star YOSHIKI – Will Compete With Hello Kitty, Cinnamoroll, And My Melody

Let’s get cool grey hair without any hassle!